There’s a reason why German Shepherd is one of the most famous and beloved dog breeds in the world, one that often dominates dog competitions. These dogs are beautiful, intelligent, highly trainable, loyal till the end, and extremely athletic. In this respect, we should provide the best food for german shepherds so that as the puppy grows there is a sync between its age and the amount of growth that goes hand in hand.

But to fulfill this tremendous potential, German Shepherds require the right diet, and by eating, we don’t just mean lots of food that may seem the logical choice for a big dog. The matter is a little more complicated than that, and we break it down in detail in this comprehensive German Shepherd guide, so your dog can have many years, spent to the best of its immense abilities.

What The Best Dog Food for German Shepherd Puppies 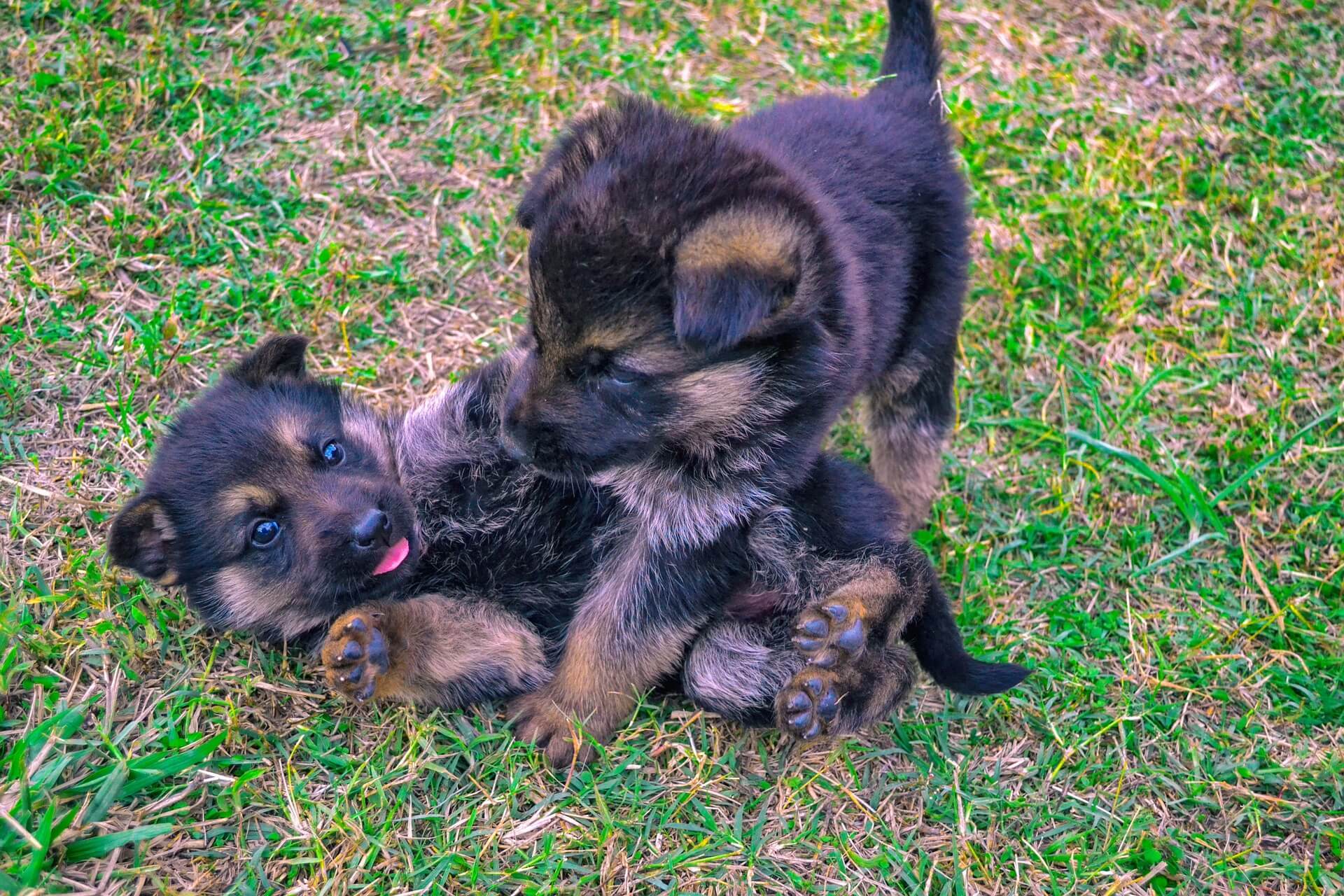 A dog’s diet doesn’t simply change in quantities as it grows up in size, in fact, approaching it like this is one of the surest ways to prevent your dog from growing up healthy and strong.

German Shepherds may continue growing until they are 18 or even 24 months old, but the most crucial part of their development is the first 8 months when you have to consider about the best food for a german shepherd puppy.

During that time, they undergo explosive bone and muscle growth, and the right amounts and ratios of nutrients are required to support it. Even beyond the purely physical dimensions, these initial months of a German Shepherd’s life are also crucial for laying down the foundation of a healthy immune and digestive system, thus minimizing the chances of various diseases at a later stage, such as allergies, arthritis, bloat, obesity, dysplasia, and more.

In that spirit, first and foremost, when considering German Shepherd dog food you need to make sure your puppy is treated to the food, befitting a future loveable beast – a large breed puppy formula. This formula is characterized by its specific ratios and quantities of calories, carbohydrates, and calcium, set by experts for large dogs’ optimal development.

This isn’t some hoax or a whim, designed to squeeze out more money or give dogs’ owners a reason to pat themselves on the back. On the contrary, denying your German Shepherd puppy the right formula will most likely lead to malnourishment that can have serious consequences.

German Shepherd puppies require a formula that has between 18% and 22% of protein content and between 8% and 12% of fat content. Only small amounts of fiber will do. Furthermore, the ratio between calcium and phosphorus should be 1:1 or 1.2:1 at most. Anything the deviates from it too much can result in orthopedic problems. Also, too much protein can give your puppy an upset stomach, so don’t think stuffing it with protein is a good idea. We are adult enough

Because no two dogs are the same in all respect, regardless of their belonging to the same breed, it’s essential to check with a vet now and then during this delicate stage of your dog’s development. This way, you’ll know with more certainty when exactly is the time to switch to the adult formula. If you leave the transition for too late, your dog is at a higher risk of orthopedic problems due to the overly rapid bone and joints growth.

Experts’ opinions on when that transition should take place tend to diverge slightly, which is why it’s all-the-more necessary to consult with a vet from time to time during this period. Some say 6 months, others 8, whereas some believe the adult stage starts when the dog has reached 80% of its maximum size.

Furthermore, you need to bear in mind your puppy doesn’t become an adult overnight. It’s a gradual process, and, respectively, the food intake needs to reflect that. A German Shepherd puppy needs to consume 500 calories per day, and this amount should gradually increase to around 1,500 to 1,700 calories as the puppy grows into a young adult.

As your German Shepherd puppy grows up, the number of times it feeds per day should decrease.

While it’s under 4 months old, your puppy should eat 4 times per day; between its 4th and 9th month, the meals should be 3; and after that, your dog can have 2 or 3 meals per day.

What’s even more important than adhering to these specific numbers is not to free feed your puppy. It means that you should never give your puppy’s ration for the entire day in one go and expect it to show maturity and pace itself. Puppies have no such self-restraint. They will eat the whole bowl in one go, then most likely will start vomiting and bloat. So there is a reason for choosing the best food for German Shepherds with a sensitive stomach.

Moreover, after its 5th month, your puppy should start shedding its baby fat and start becoming leaner and more muscular. If it doesn’t, that’s a clear sign you’re not feeding it properly and should consult with a vet on implementing some changes.

Due to their relatively shorter colon for large breed dogs, German Shepherds can experience some difficulties with digesting food, which is why their diet needs to be precise. This diet needs to strike a fine balance between protein, carbohydrates, fat, minerals, vitamins, and fiber.

Adult German Shepherds should consume between 1,700 and 2,400 calories per day, as long as they are active and young, or in other words, in the prime of their life. In contrast, a senior German Shepherd doesn’t need to consume more than 1,300 to 1,600 calories daily.

Protein contents of their food should be between 18% and 24%, whereas 14% is considered a good benchmark for fat content. Make sure that the protein is coming from actual meat or meat meal that is devoid of moisture and has higher protein concentration.

In the same vein, the fat source is also important, at least 5% of it having to be healthy, most often being derived from chicken or canola oil. The level of carbohydrates should also be monitored, with fairly low indexes being the goal, and healthy alternatives like sweet potatoes as their source being more than welcome. This can easily keep blood sugar levels in check.

Furthermore, omega 3’s are great for your adult German Shepherd’s coat and skin, whereas DHA, which is a type of omega 3, is particularly beneficial for these dogs’ brain and eye development.

Interestingly, a lot of German Shepherds are allergic to grains, which is why some of the most renowned and suitable food brands for them are grain-free.

Last but not least, not only should you adjust the calorie intake accordingly to your German Shepherd’s age and level of activity, but it’s carbohydrate and fat intake in particular. While younger, more active dogs will burn those substances with ease, the older, less mobile ones will struggle to do so, gain weight, their ailments will exacerbate, as a result of which a vicious circle can easily ensue.

The holistic approach offers two options – lamb and lamb and chicken flavors, both of which are grain-free. At 25%, the protein content is almost perfect for the average German Shepherd.  At 1.3:1, the calcium to phosphorus ratio is slightly off, but it’s hardly a deal-breaker.

At 35%, this one is heavy on the protein, which isn’t random, but in line with its marketing angle, which revolves around a dog’s inherent wolf nature, so consult your vet before choosing this otherwise high-quality brand.

With sweet potatoes being the source of carbohydrates, and a 1.2:1 calcium to phosphorus ratio, Blue Wilderness scores some major points.

This brand is renowned for its taste qualities, and the rest of the ratios and ingredients are just slightly off the ideal mark, so if your German Shepherd is spoiled for taste, this is a healthy compromise.

Ingredients like carrots, cranberries, and blueberries make for a powerful, anti-oxidant treatment, while sweet potatoes provide healthy carbohydrates. At 32%, this formula has lots of protein, but given the rest of its attributes and the overall balance, these high levels can translate into a mighty, active German Shepherd, full of energy for a long time.

Wellness Complete is also similar to the puppy formula, but if adequately adapted to an adult dog’s needs, you can’t in any way go wrong.

This is one, if not the most renowned brand, full of new ingredients like ginger and dandelion roots, peppermint leaf, and more, all of which are regional and respectively very fresh. Orijen is an epitome of top quality, and it naturally comes at a price, but if you can afford it, it’s well worth it.

We have cited the reasons and criteria concerning the best food for German Shepherd dogs. You have to take care of your furry friend cautiously and pay heed to the advice your vet has for the best conditioning of your pal.

Diet can make or break a dog’s life, and it will slowly but inevitably be reflected in your . By giving your German Shepherd the best diet possible, proper training, and loving care, you will have happier moments with your dear friend.