While many lovers of dogs like to jump on the breeds available in most homes today, some are usually thrilled by the unexpected sight of the great breeds of Dogs That Look Like Bears, many of which seem fearful,  proud and would undoubtedly make you stop if you find them unexpectedly on your path at night.

From studies, it has been observed that many large breeds tend to move slowly, are friendly, careful, often with a relaxed and tolerant character that would embarrass many breeds of small dogs. Most of the largest and most adorable breeds are those who look like bears and contain soft layers that would feel good to touch.

If you have fallen in love with the charm of these bear-like dogs, you may wonder which breeds look the most. Below is a list of  great dog breeds that  look similar to bears:

This dog breed is, without a doubt, special because of its peculiarity.  They are usually beautiful,  large, and often look like bears. In addition to the size, they are soft breeds of dog that can reach up to 51 centimeters in height. Their side collars usually look a lot like that of bears, and also their snout that looks a bit grumpy.

The Chow's fur is one of the thickest you can find, and you can lose an entire hand just to see where the coat ends. Also, Chow chow is a blue-tongued dog, which  is perhaps the most popular dog "bear." Furthermore, its one among the first dog breeds which comes to mind whenever you've got thoughts about dogs that look like bears.

The Shepherd Dog of the Maremma

The shepherd dog of the Maremma is a dog breed which you may not see much abroad, but they tend to be quite many in their country of origin, Italy. This dog breed is usually tall, the males can reach an average height of up to 73 cm, and some are usually taller. The shepherd dog of the Maremma comes with a white mantle that makes it look like a polar bear. Its history goes back thousands of years, and its widely used in guarding livestock.

This dog breed usually holds people for another look, as its a big dog with a shiny fur and has very sweet and calm attributes. The NEWFOUNDLAND dog usually looks like bears, and its more dominant color is black.

We do not know how many bears live in Tibet, but we are sure that this dog breed looks a lot like them. You have to look again to see if it's a bear or a dog because its colors are also very similar to those of the wild animal.

The Tibetan Mastiff breed isn't excepted as regards dogs that look like bears, and although it is not a very common breed, upon observing carefully, you could find one when walking in an area which houses many dog owners.

This dog has a snout very similar to that of a bear. If we add that to the layer of hair and the rounded body, it would have a resemblance closer to a bear. If you put a dark bear next to you, you will be sure that there is a certain similarity between them.

The Caucasian Shepherd Dog is a huge breed of dog that looks like bears and is also called the Ovcharka Dog. It is usually found in the North Caucasus regions of Georgia and also Armenia.

It is one of the largest dog breeds that exist. From its face to its body, nothing seems to have to do with a dog, but with a bear. There are those who dare even to claim that it has features on its face like those of a lion. Undoubtedly, when we see them for the first time, we will not know whether to caress them or run away, because their appearance is quite imposing.

They are not very common, and touching them would be safe.In all, the Caucasian Shepherd is a dog that, both puppy and adult, will give you the feeling of currently being in front of a bear that you will not be able to resist.

Panda dogs, a new breed or modern art? That is the question when it comes to investigating the new trend that is causing a furor in the Asian country, China. Apparently, the dog became, from a very popular gastronomic dish in China to the "faithful companion," which looks like a bear and everyone wants. 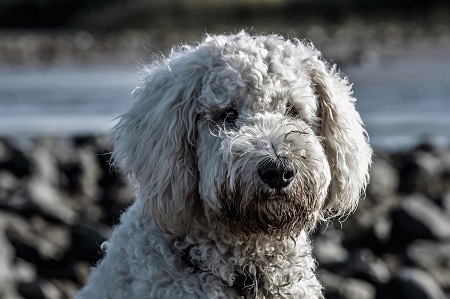 Numerous videos of the poodle dogs usually circulate online daily. If we put them together with a bear, we could not clearly see the difference. They are tender, with similar fur and their eyes further seem to have been superimposed, as in the case of a live bear.

When they are big, well, better said, the Pomeranian dog usually looks like a fox. Irrespective of the color they possess when they are little, whether it is white or brown, they usually have a resemblance of little bears that need our care and protection.

A Mix of German Shepherd, Akita, and Corgi

This dog breed went viral all over the world because, given the mixture that their genes have of three breeds, research was carried out to raise more specimens and even call it a breed. Although this is something that is still ongoing, the already successful products tend to look like bears.

This is another beautiful dog breed that if it does not bark, we would not know if it is a bear or a dog. It's nice hair and dark eyes will make us believe that we have a bear pet.

The Crossing of the American Eskimo and Keeshond

We do not know what the owners of this dog were looking for or if their appearance was only the result of chance, but the outcome of this cross between the American Eskimo and Keeshond has given rise to a dog which looks very much like a bear.

This is a dog breed with long, leafy and especially curly hair. When you take good care of its appearance (that is, you take it to the hairdresser), you can leave with an appearance that looks like a bear (both small and old). It will undoubtedly attract attention in the street, and you will not be able to resist putting a teddy bear next to it (the same color) and taking pictures so that you can discover who the real one is.

There are many breeds of dogs that look bears. Can you imagine that you had one like that in your house? Surely you would be the envy at the time of walking with it because many people will think that you've got a bear for a pet. Also, there is no doubt that nature would never stop giving us amazing sights and experiences, as highlighted above.

Top 6 Tips for Taking Care of Your Bichon Frise

Is An English Shepherd a Good Family Dog?

What Steps to Take to Introduce New Dog To Old Pet Dog?

How You Can Incorporate CBD Into Your Dog’s Diet
What You Need to Know Before Owning A Large Dog Breed?
The 10 Hidden Dangers for Dogs at Christmas
Top 6 Tips for Taking Care of Your Bichon Frise
Six Things to Know Before Adopting a Senior Rescue Dog
Christmas Wishes for My Dog -Cares for Your Pet to Enjoy
Black Friday Dog Toys to Cheer up Your Christmas and Make it Memorable
Scroll Up
Follow @https://twitter.com/jefferson_alica
Follow